In response to increasing frequency of critically low summer flows in the Cowichan River, a partnership was formed by the Cowichan Valley Regional District (CVRD), Cowichan Tribes, the Cowichan Watershed Board and Catalyst Paper (a Paper Excellence company) to conduct a Water Use Planning study as per the Province of BC Water Use Plan (WUP) Guidelines of 1998.

A Public Advisory Group was formed and, beginning in the Fall of 2017 and finishing in the Spring of 2018, the group developed a Water Use Plan (WUP) for Cowichan Lake and Cowichan River that provides a balanced, long term solution for storing water on Cowichan Lake in order to maintain sufficient water flows in the Cowichan River into the future. The key recommendation is to construct a new weir with an increase of 70 cm of elevation above the existing weir (go to the Cowichan Lake Weir Design page to learn more about this project).

A condition of this recommendation is that an assessment be done of the potential impacts to Cowichan Lake shoreline due to the additional storage required to meet future needs. The assessment is being funded entirely by the BC Salmon Restoration and Innovation Fund through a grant that was awarded by Fisheries and Oceans Canada.

The Shoreline Assessment will determine the potential impacts to the Cowichan Lake shoreline due to holding water earlier and at a higher level than historically typical in the spring period. This assessment will be used to guide the response and approach of the Province of BC in approving a water licence and any responsibilities of a future licence holder to those property owners where effects may be projected.

The Shoreline Assessment report will be made publicly available upon its completion which is anticipated to be in 2022. Updates will be provided through this website throughout the project. If you have questions or concerns, please contact the CVRD Project Manager at leroy.vanwieren@cvrd.bc.ca .

Check out Leroy’s Corner for updates as the project progresses.

In 1884 the E&N Railway was granted a huge area of land on the east coast of Vancouver Island as compensation for constructing a railway. The beds of water bodies, including Cowichan Lake, were included in the original land grant from the Crown.

The E&N Railway retained ownership of the bed of Cowichan Lake (and the lakebed is now owned by its successor company, CPR Pacific Railway), but granted most of the land around Cowichan Lake to various parties at the turn of the 20th century. These land grants generally defined the lakeside property boundaries as the natural boundary at the time.

Many of the old surveys for the E&N land grants to other parties poorly defined the natural boundary or have errors in the depiction of it. This occurred for two main reasons; first, the measuring technology was crude compared to today, and second, because little attention was paid by pioneer land surveyors to accurately depict the natural boundary. An accurate depiction wasn’t a concern because at the time natural boundaries were considered to be a marker themselves and were defined by their position on the ground rather than by an arbitrary plan.

Modern record-keepers in the land title system have overridden the reliance on physical natural boundaries in favour of a reliance on records (plans). This has led to the perpetuation of survey errors and inaccuracies in the depiction of natural boundaries. The fact that the bed of Cowichan Lake is not owned by the Crown has eliminated the normal statutory remedies for correcting errors.

Because of this history, the titles to lakeside property boundaries at Cowichan Lake have not been treated uniformly and this has led to a complex and inconsistent situation. In many cases the depiction of the natural boundary on the original E&N land grant has been rigidly held, which has resulted in modern surveys which show some lots terminating above the present natural boundary while others on the same plan extend out into the lake. On other modern surveys, the present natural boundary has been adopted and the owners of the lakebed have signed the plan to indicate acceptance. Many more properties are still defined by very old surveys. As an example, the settlement at the east end of the North Arm was surveyed in 1912. Saseenos Point was originally surveyed in 1909 and Plan 1009 shows the lots extending to the low water mark.

Human interference with the natural boundary does not alter its location from a legal survey perspective but can make re-establishing the original position of the physical natural boundary difficult, especially when much time has passed.

Cowichan Lake Shoreline Assessment What are we talking about?

Click on the image above to see an infographic that explains the lines that will be shown in the Property View Tool. 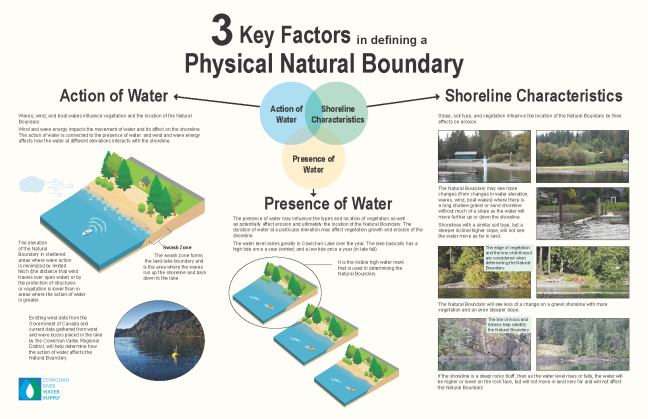 Click on the image above to see an infographic that explains the 3 key factors in defining a physical natural boundary.

Check out Leroy’s Corner for updates from the Project Manager